Spending a week on holiday in Sardinia might not be long enough! With our Sardinia cheap holiday deals, you can find just the right break for you. We're personally a bit in love with all inclusive holidays to Sardinia - the food, drink and relaxation are pretty hard to beat.

Steeped in a rich history, with a culture spanning back to the Phoenicians, Sardinia presents the allure of ancient history with a modern and sophisticated holiday destination. From the exclusive Costa Smeralda, the “Emerald Coast”, with its lush golf courses, luxury hotels and gorgeous sandy stretches, to the ancient, winding capital city of Cagliari, which looms, citadel-like, above the Mediterranean Sea, Sardinia will dazzle you.

Sardinia is great for:

Sardinia at a glance

Start with octopus salad & seafood ravioli, washed down with the local Monteoro wine

The vibrant little city of Olbia overlooks a gorgeous natural harbour on the north east coast of Sardinia. It has …

Lively San Teodoro sits on the eastern coast of Sardinia, and boasts one of the longest beaches on the island, …

This fantastic resort is mostly famous for the luxury yachts, but there’s more to Porto Cervo than just the rich …

Nestled in the Pacific Ocean, just east of the Philippines, is the independent country of Palau. Comprising many islands, a …

from £165 pp
View all Sardinia resorts

Things to do in Sardinia

Things to do in Sardinia

If you’ve come on holiday to Sardinia for the unique experience of small-island life then get an extra strong version of it by going offshore to the Parco Nazionale dell'Arcipelago di La Maddalena, on the island of La Maddalena. The beaches here are as good as those on the Costa Smeralda and come with the added bonus of real remoteness and the island’s small town is very pretty. Sea views – particularly at the west end of the island at sunset – here are particularly spectacular. Ditch the flip-flops and slip into something sturdier for the day for a trip to Capo Testa, famous for its weird rock formations and beautiful views across the short sea passage to French Corsica to the north.

If you’re up for some serious walking – and are prepared for the heat – you can follow coastal paths around much of Sardinia’s best coastlines. Porto Cervo is one of the most exclusive and expensive resorts in the world but you don’t have to go through the doors of overpriced restaurants to enjoy a day out here. Spend your time gawping at the floating palaces in the marina, browsing in exclusive luxury shops, or just taking in the astoundingly beautiful local beaches.

Flight plus hotel holidays to Sardinia make a lot of sense. Book a budget-friendly hotel and save more money for excursions and trips to cover as much as the island as you'd like.

A Sardinian holiday offers up some of the finest beaches in Europe, comparable to the best holidays in Spain and Greece. Costa Smeralda in the North boasts a mix of exclusive, pristine white beaches, and a rugged, untouched coastline, with fantastic views of the La Maddalena islands. Pevero Beach, which consists of two beaches, Small Pevoro and Grande Pevoro, is a short journey from Porto Cervo, a seaside resort town in the Costa Smeralda.

Considered the most spectacular in the Costa Smeralda, with shallow waters and calm seas, Pevero Beach is suitable for a family day out. In the South, close to the capital city of Cagliari, is one of the longest beaches in Italy: Poetto Beach. Soft sands, shallow seas and lined with many restaurants where you can enjoy delicious Italian island treats, this beach makes for a perfect day trip out of the bustling, narrow streets of Cagliari. Sardinia is riddled with bays and sandy places to explore – far too many to list here. If you want to see it all, we recommend renting a boat and exploring!

We mentioned archaeological sites, and the many superb location comprise a list too massive to list here. Covering the island are the iconic Giant’s Graves and the monolithic-like towering Nuraghe, ancient stone formations and buildings several thousand years old. Start your cultural experience of Sardinia at the Tombe del Giganti, near the delightful town of Arzachena, in the north-eastern part of Sardinia. Charged with a mythical energy, this is a great spot to visit if you’re travelling alone, with friends, or even with your family.

The kids will love the tale of the giant’s. Another iconic site is the Monte D’accoddi, one of the only examples of a Ziggurat (a sort of pyramid) in Europe. The oldest stones in the formation are dated to 4.000BC. You can’t miss this. We haven’t even mentioned the many beautiful architectural delights of Alghero, or the stunning museums in Calgari, and the ancient walls, and hidden stone structures in the country-side, and entire preserved ancient villages, comparable to the ruins of central Italy…well, we guess you’ll have to visit for yourself.

Sardinian cuisine is traditionally focused on its agro-pastoral past, later influenced by typical central Italian cuisine and a growing fishing industry. There’s fine cheese and delicious wine ready to be enjoyed in a laid-back, informal and chatty atmosphere in the many restaurants that line Sardinia’s narrow streets and beachfront promenades, either in Cagliari or Costa Smeralda.

We recommend trying maialetto, a sumptuous roasted pork dish, or if you’re in Alghero, slurp up a Sardinian Seafood Stew that includes native fish, like sea robin, eel, skate and tiny squid octopus. Now, Sardinia is famous for its cheeses, but there’s one cheese which is so famous that, if you pulled a wheel of it out of your shopping bag, locals would be fighting over it.

Sardinians call it casu marzu, which translates as “rotten/putrid” cheese. Bear with us! This cheese is made from sheep milk and is renowned for its strong taste and the fact that its riddled with maggots! Yep. We know, that sounds crazy! Apparently, it’s delicious… but this is something only for the hardiest foodies. If in doubt about our cheese-y suggestion, stick with Sardinian wine, which earned the island the nickname “insula vini”, or wine island, in the 16th century and can now be enjoyed in luxurious settings in the Costa Smeralda.

Sardinia is a quieter island, presenting a different atmosphere from the party vibes of other Mediterranean islands, like Majorca or Ibiza. The closest vibe you’ll get to Sardinia’s smaller, partying cousins, can be found in Porto Cervo, or Baia Sardinia, on the Costa Smeralda in the North of the island. During the peak months of July and August, this area is popular with high-flying tourists and there are several bars, restaurants and clubs open well into the night. It’s a classy destination for cocktail-sippers.

Other reputable locations include Olbia, whose bars overflow most nights, and there are plenty of spots to settle down and enjoy a warm evening. There are not any larger clubs to speak of, though! Sixty kilometres down the coast from Olbia is San Teodoro, which is a small town boasting some discos and pubs, and beautiful beaches to recover on in the morning.

More clubs are springing up in the South, around Cagliari and Villasimius. There’s a good mix on Sardinia and if you ask around, you’ll find no end to places to enjoy a drink and socialise on warm island nights.

Sardinia’s affectionately refer to children as bambini! You’re bound to receive a warm welcome travelling as a family in Sardinia, where the Italian values of family are as strong as the sun, as calm as the seas, and as welcoming as the flat, sandy beaches.

Almost all the separate regions of Sardinia are great for kids: Alghero in the Northwest is an ancient town with ancient walls, with nooks and crannies to explore, nature parks to romp around in and beaches lined with mysterious caves. In the Olbia area, there are more fabulous beaches with water-based activities for the older kids, and shallow seas for the little ones to splash in.

There’s also areas of gentle hiking through beautiful nature parks, with enough wildlife and hidden areas to keep the children pleased all day long. If your family is keen on activities you can all do together, a day of safe snorkelling in the Tavolara marine protected area is a great way to spend a day. There’s instruction for all levels, and courses available for children from the age of 7!

If you’re keen on a lovely, warm summer holiday with your family for 2018, then Sardinia is an excellent choice. With cheap flights to Alghero, and hotels that cater to families,  you can all visit and the holiday won’t even break the bank.

Sardinia’s alluring charm will woo you and carry you right off your feet. From the luxury of the Costa Smeralda's fancy hotels, to the cobbled streets of Alghero and right into the hidden bays and sandy beaches of Olbia, a romantic holiday to Sardinia is the ideal choice for 2018. If seclusion is what you’re looking for, grab the keys to a boat and find a quiet bay in the La Maddalena Islands and settle down for the afternoon in your own, personal slice of paradise.

If you want to explore the wilds at your own leisure, hop on a ferry from Palau to the largest of the island and enjoy a day watching the wildlife. Enjoy a bottle of wine over a candlelit Italian feast on a narrow street in Cagliari, winding your way up to the top of the city for views of its sparkling rooftops and the glowing Mediterranean Sea. With hotels catering to the romantic types, with huge beds, balconies with gorgeous views, and soothing spas, Sardinia should already be on the top of your list for a romantic getaway.

Where to go in Italy

Soak up the dolce vita with our essential guide to where to go in Italy. From the glamorous capital of Rome to medieval time capsules in Tuscany, we’ve picked out the best destinations in Italy for your holiday. Food, beaches, history, culture…we’ve got all the Italian highlights ...

Most popular hotels in Sardinia 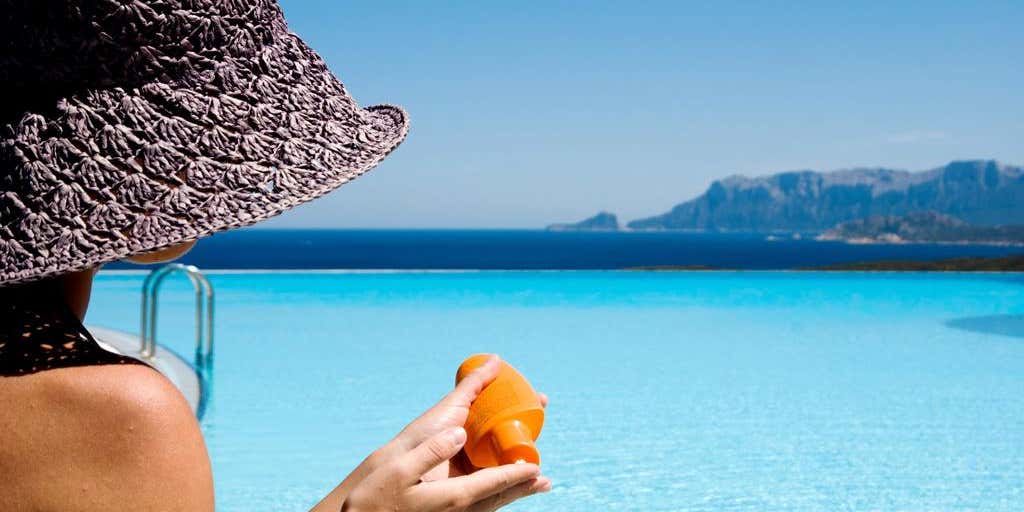 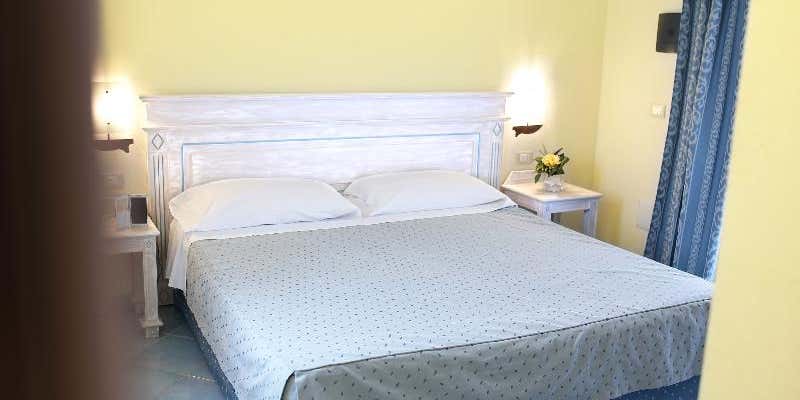 from £273 per personCheck availability
View all hotel deals in Sardinia

What is the most beautiful part of Sardinia?

If you are after a gorgeous destination, there’s loads to see here! Some of Sardinia’s most beautiful areas include Neptune's Grotto, Capo Testa, Chia beach, Bosa, Cagliari, the Gulf of Orose, and the village of Castelsardo. Just to name a few!

What is the best time to visit Sardinia?

The best time to visit Sardinia is in spring, in the months from April to June, when the weather is warm and sunny without being too hot.

Which part of Sardinia has the best beaches?

If you are after a beach holiday, some of the best parts to stay in are Golfo Aranci and Pula on Sardinia’s coast.

How many days do you need in Sardinia?

Five days are ideal for a Sardinia holiday. This will allow you plenty of time to explore the beautiful coastline, sample the delicious cuisine and explore the picturesque villages. You’ll hardly want to leave!

Which coast of Sardinia is the best?

The North is famous for its dramatic, rugged coastline. However, Sardinia’s south coast, albeit less popular, also features sandy beaches aplenty and a lot less crowds.

Check out some of our most popular cheap holiday destinations in Sardinia.