The half term breaks are the perfect excuse to get the family together, jump on some cheap flights, and make the most of some of the best destinations we’ve got to offer. From Gatwick - to where? Maybe you've already sampled the Canaries, or the Balearics, and you're keen to discover somewhere new.

The next half term is in February, so how about a browse at our top deals for February half term getaways?

Why book Half Term holidays

Now is the perfect time to make the most of fun waterparks and theme parks!

Yes, it's half term...but the beach are still quieter than in peak summer.

See some of the world's most famous landmarks minus the heat! 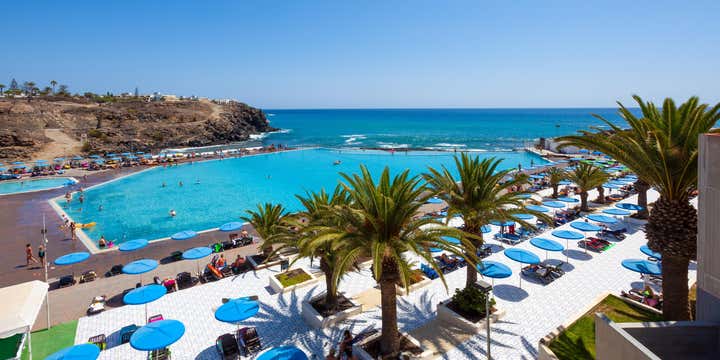 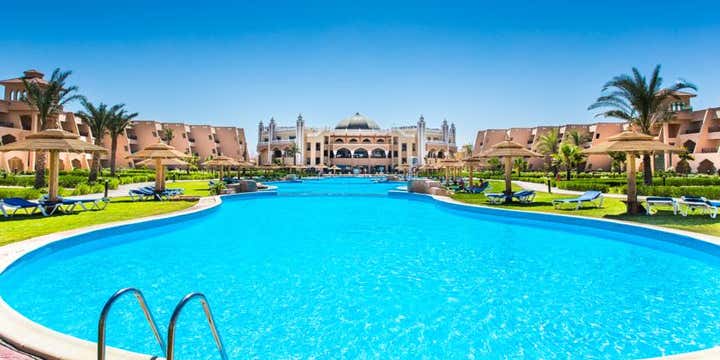 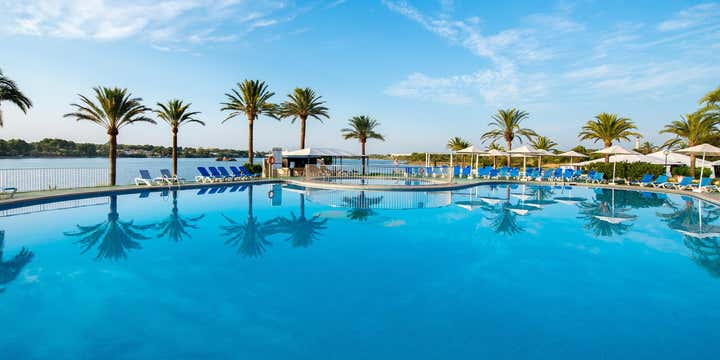 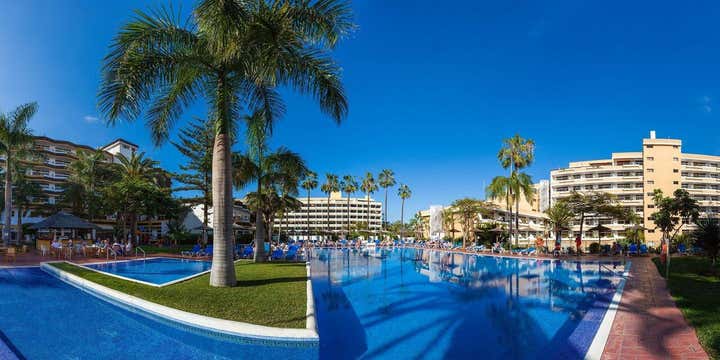 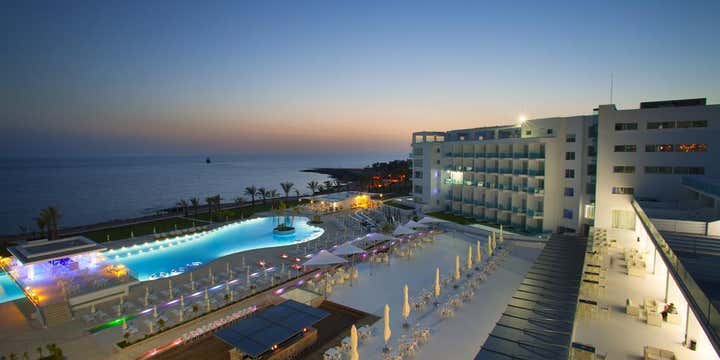 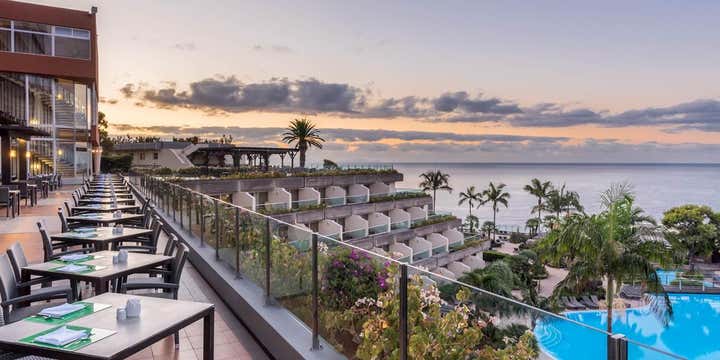 Your guide to Half Term holidays

The Balearic Islands are varied and cater to all.

Majorca is the keenest contender for top spot in terms of the best half term holiday destinations in the Balearics. With bold resort competitors on Majorca like Alcudia and Cala d’Or, is it really that surprising?

Booking a hotel in Alcudia means you’ll have access to two worlds on Majorca. Firstly, Alcudia has perfect Blue Flag beaches. The sands run along Playa de Muro into the resort of C’an Picafort. Secondly, Alcudia’s old town can please those looking for culture whilst on holiday to Majorca, there’s quaint cobbled streets and everything you might expect of a town lined with 14th century walls.

Rather than Alcudia, what about Cala d'Or? Cala d’Or is known for its main beach, Cala Gran. Cala Gran is your quintessential Mediterranean beach: white sands, blue sea, blue(r) sky.  Along the coast of Cala d’Or you’ll find plenty of restaurants, bars and taverns, all situated around coves lined with fringes of pine trees.

If it's a party atmosphere you're looking for you shouldn't forget Magaluf. Magaluf has become synonynmous with party holidays for British tourists to Majorca over the last decade. If we're talking about party destinations for your half term holidays, don't forget Ibiza. Ibiza is home of international music and partying in the Balearics.

The Canary Islands throw their weight around in this battle of the half term holidays. A firm favourite for decades, the Canaries boast the obviously beautiful islands of Lanzarote, Tenerife, Fuerteventura and Gran Canaria.

Lanzarote boasts some of the best beaches in the Canaries, with big names like Costa Teguise, Puerto del Carmen and Playa Blanca. These beaches are family friendly. Costa Teguise is probably the best for small children, as it’s not as busy as Puerto del Carmen and has much more sand-frolicking potential than Playa Blanca. Lanzarote is also home to a verdant and stunning interior landscape, wherein Timanfaya National Park is waiting to reveal its splendours.

Tenerife is another big favourite. Big players in the beach scene, like Costa Adeje, Playa las Americas and Los Cristianos are busy, busy, busy, and you’ll soon see why. Just like Lanzarote, they’re beautiful and family friendly, making a choice between the two islands quite a tricky one! Tenerife even has its own national park, Mount Teide National Park.

If the choice wasn’t hard enough, Fuerteventura enters the ring. With the iconic Corralejo and Caleta de Fuste leading the fray, Fuerteventura has its own plethora of stunning beaches on offer. We can’t miss Costa Caleta for families, and the protected Jandia peninsula has shops, sports and golden sands galore. If you like water sports, Fuerteventura is for you. Sotavento plays host to the Wind Surfing World Championships.

Gran Canaria could arguably called the sleepy sister of Lanzarote, Tenerife and Fuerteventura, but don’t be fooled. The beach resort areas of Playa del Ingles and Maspalomas create just as big smiles as their Canaries compatriots. If you do want something quieter, we recommend Puerto Mogan or Puerto Rico, where there’s more space and peace.

Whether you choose Lanzarote, Tenerife, Fuerteventura or Gran Canaria, rest assured there's something to please the whole family, from the oldest adult to the youngest child!

Picking holidays with loveholidays.com means you’re going to have a lot of choice. Want to please the adults and the kids? The Canaries are a great choice: Lanzarote and Tenerife are teeming with activities!

But if you're keen for somewhere different, and we’ve seen the Balearics, the Canaries and Spain's Benidorm, where else is there?

To miss the Algarve off this list would be criminal. Albufeira is the crown jewel of Portugal’s Algarve, beautiful enough and buzzing enough to rival to Spain’s Costa del Sol.  Flights to Portugal are just as cheap, and the deals just as fantastic, as to any of the other destinations. Albufeira has everything you need for an exquisite half term holiday. Zoomarine Algarve, the incredible Falesia Beach (Olho de Agua) and enough family friendly hotels you’ll be spinning from the choice.

Turkey remains a popular half term destination because of its hot temperatures and exotic climes. Both Dalaman and Antalya are popular destinations for a half term getaway. Antalya is the so called Turkish gateway to the Meditteranean, or the “Turquoise Coast.” With numerous hotels and dozens of glamorous restaurants, bars, clubs and golden beaches, Antalya is a strong choice for your next half-term holiday. Dalaman is another firm favourite in a south western corner of Turkey, known for its verdant countryside and all inclusive hotels.

We shouldn't forget about the Greek islands. First, we pick...Corfu! Corfu has everything we've come to expect of a Greek holiday: great food, hospitality and nightlife. From Sidari to Roda, to the manic Kavos (Zante is similarly manic), Corfu has a little something for every type of holidaymaker on your half term holiday. Don't forget other treats from Greece, like the island of Skiathos, Agia Georgios in Crete, and Paphos or Limassol in Cyprus.

A recent burgeoning half term destination is the enthralling Marrakech. With a cheap flight over the Mediterranean it'll really be like you're travelling several hundred miles across the globe. Marrakech is exotic and alluring, if you fancy something different, why not investigate?

Where to go in Spain

Spain is the original hard-hitter of half term family holidays. From Costa Brava in the North to the eternally sunny Costa del Sol in the south, Spain has a lot to offer.

Let’s start with Costa Brava. The region’s most magnificent attraction is the Lloret de Mar, a sweeping Blue Flag Beach lined with bars and pubs, and not a few fantastic restaurants. Lloret de Mar is a favourite for a half term holiday.

Moving down the coast of Spain, we reach the Costa Dorada, Spain’s “Golden Coast.” The Costa Dorada is home to popular attractions like PortAventura, Tarragona and Barcelona – including the family friendly area of Cambrils. The continuation of Blue Flag beaches makes the Costa Dorada another top destination for your half term holiday.

Further down Spain’s east Mediterranean coast and we reach Costa Blanca, home to the iconic Benidorm and the equally attractive Alicante. Here you’ll find the stunning Benidorm beaches of Playa Levante and Playa Poniente. Benidorm has been a favourite for family holidays for decades, this is because Benidorm boasts great family friendly accommodation and activities for adults and kids alike! Another family favourite, down the costa in Alicante, is Playa del Albir, in Moraira. Albir is a small, modern resort perfectly suited for a family getaway.

Not to be missed

There isn’t a better time to get away before the winter gloom is set upon us. Grab the kids and whisk them off to one of our top destinations for the October half term break. Not only do you get a good week away, but it is also good value for money. There are plenty of destinations to choose from, whether you’d rather be depending on reliable weather or exploring the rich culture. Perhaps you’re looking to keep the kids busy with a few adventurous activities during their time off. Whatever it may be, you’ll surely find something fit for everyone in the family.

Tenerife is always a popular choice among families for the October half term holidays. A reasonable four hours, 15 minutes away, the island enjoys a warm climate and plenty of family-friendly accommodation. Perhaps, Cyprus will be your choice. Located in the Mediterranean, you’ll have a range of fabulous beaches and guaranteed sunshine. Or finally, why not hop across the brilliant Algarve? Fascinating coastlines and delicious cuisine mean the whole family will be in for a treat.

May half term holidays

There are a number of reasons as to why May is the perfect time for a trip abroad. It’s the period where everyone is shattered from the school year. So, it is a great opportunity to revitalise the kids and give them the break they deserve. On top of that, it’s a less busy time to travel than Easter and summer, meaning you can get some great deals on flights and accommodation. All in all, a quick short-haul getaway is exactly what the family needs during the May half term holidays.

With our huge range of destinations, you can book a sweet escape for the whole family. Where should you go? Perhaps, the Costa del Sol is right up your street. Sandy shores, rich culture and a warm climate… what more could you need? On the other hand, Majorca in the Balearic Islands is yet another great choice. Full of family-friendly beaches and accommodation, you can’t go wrong. A trip to Italy might be just what suits the family. Boasting a variety of landscapes, discover picturesque countryside and beautiful coastlines. Wherever you choose to visit for the May half term break, the whole family will no doubt come back refreshed and rested.

Looking for inspiration? Check out our top half-term destinations.